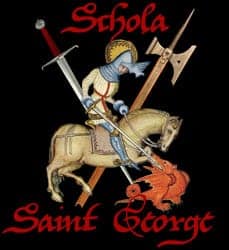 Brian R. Price and Robert Holland of the Schola Saint George have the pleasure of announcing our intention to pool our resources with the Davenriche School of European Martial Arts to found an indoor training facility in the South Bay, the Western Academy of Arms.Said Academy will hopefully feature 7-day per week availability, featuring classes in armoured and unarmoured medieval fighting techniques, use of the Rapier based on DiGrassi and Joseph Sweatnam, and children’s classes in chivalric combat. and will be open to other instructors who might teach such courses as stage combat techniques, Smallsword, or modern combat techniques.

Membership in the Academy is projected to run from $50 to $110 per month, depending upon the number of classes taken. As of early September, we have not yet finalized the site; we need 15-20 new students to support the new facility as a minimum, so if you’d like to participate, let one of us know immediately so that we can finish our business assessment. mailto:brian@chronique.com

Our Mission
“To study, practice and refine the arts of swordsmanship and horsemanship as they might have been practiced in the Middle Ages, supporting and incorporating the rich corpus of materials left to us by our ancestors in the medieval fechtbuchs. To encourage our students to develop their bodies and their spirits by practicing their art with training in all manner of medieval weapons and techniques, then applying these skills in various medieval feats of arms. We charge our students and our teachers to become worthy exemplars for others, offering fellow students of the sword respect before derision, and more importantly, to adopt a chivalric philosophy that encourages the knightly virtues and cultivate a sense of personal responsibility through which our modern society can be improved.”

IntroductionYears ago it was my pleasure, alongside a number of close friends, to expand our study of medieval swordsmanship by pursuing a training regimen in an attempt to crystalize our understanding of the required mechanics. Building upon early training I received when I first began what has become a lifelong love affair with the sword, we devised drills, movement exercises, and focused sparring in an attempt to refine our technique in pursuit of the elegance and power that is the hallmark of a truly gifted swordsman.

Without knowledge of the rich corpus of fechtbuchs–fighting manuals–that existed prior to the 16th century, then active members of our own Company of Saint George drifted away from the regularized format for training; it seemed to draw our art closer to the Eastern martial arts and to modern martial arts than it did the medieval period that interested us.

Over the last few years, scholars have begun to unearth surviving fighting manuals of the Middle Ages, manuals that reveal a whole new world of techniques that can be successfully studied and adopted by those interested in knighthood, chivalry and the medieval tournament. The works of Hans Talhoffer, Fiore de Liberi, the anonymous Jeu de la Hache and Royal Armouries manuscript I.33 are just a few of the hundred and seventy five known fighting manuals.

We have already succeeded in starting the ball rolling with respect to medieval tournament formats; you see them now amongst the other 30 tourney companies, within the SCA, and within rebated swordsmanship practitioners in North America, Australia, and Europe and there are exciting efforts to reestablish an international tournament circuit. Our Company remains active in these areas.

Medieval martial arts training schools are pursuing “Historical swordplay” and “Historical Fencing” with vigor, growing their membership and moving themselves closer to legimitization with respect to other martial arts / sports / reenactment communities. I believe there is much to be learned not only from the original sources but also from these communities.

There are a myriad of methods one can use to romance the sword–one can fight with batons, as is done in the SCA (and much of this fighting is quite good, even with often-derided kneeling convention); one can fight with wooden wasters–practice swords–as has been loosely documented for Medieval Europe; one can fight with rebated swords of steel; and one can pursue “cutting practice” with sharp swords to validate reconstructed techniques. One cannot, for reasons of safety, fight with sharp swords, though all of the above are dangerous enough and must be respected.

The Schola of Saint George seeks to train students in the arts by exposing them to a variety of methods to improve their skills. We advocate the use of the medieval feat of arms, generally fought a plaisance, to test both these skills and the character of the combatants, although we recognize that there are many uses to which martial skills might be put, and this is but one.

We invite others who wish to study with us, or to work with and improve our syllabus, to contact us at their convenience. There is more unknown than is known in this exciting field; it is an exciting time and we are honored to travel this road with others, regardless of their approach, in a journey that offers a sense of brotherhood forged in the joi de combat.

Teaching Philosophy
The Company of Saint George, our tournament society, focuses on the period of the Hundred Years War, from 1350 – 1450. As such, the majority of the work we will employ with the Schola will focus on techniques gleaned from the fechtbuchs of this period, although a certain amount of reconstruction and extrapolation must be expected as none of the fighting manuals yet found represent complete fighting systems.

We recognize that unarmoured combat–which some of the techniques seem to represent–is different from fully armoured engagements. To this end we will encourage the study of both forms of combat, and will not restrict the lessons to techniques allowed within the framework of any particular reenactment or combat society, rather striving to imbue each combatant with a sense of responsibility which will allow them to participate in a variety of venues for competition and free-sparring.
We recognize also that there are various methods of studying the sword, each of which presents advantages and key shortcomings. Focusing on any one method will yield weaknesses, so our objective is to use several approaches including reconstruction, drills, sparring, testing and competition. Overlaying all of this is the chivalric philosophy which we believe gives the martial art itself value, for it is guidance on how to use the power that is gained by the study of our art.

While these ideas were core elements of the older training we pursued in the late 1980s, they have since been well thought out and extended in the “HACA” approach (the Historical Armed Combat Association). The Schola St. George is now an affiliate (as of January, 2001) of the Academy of European Medieval Martial Arts (AEMMA), and plans to remain active in the study of fechtbuchen techniques and the presentation of our tournament experience. Given our approach we expect to forge close relations with historical fencing federations in North America, Australasia and Europe so that our members might participate in the wider historical swordsmanship movement now growing with near-reckless abandon.

Students will start off with an introduction to the historical references, to the terms and resources that will cover the form in question. They will not, intitially, need equipment, working through balance, footwork, and simple movement exercises to build confidence and fluidity. Drills with wasters will follow, repetitive work designed to instill movements in the student’s repetoire and to acquaint them with the fundamental stances, guards, movements, attacks and parries of the form they are working in. Various forms of focused and free sparring will be engaged in, first with wasters and later with batons or blunts in armour, if appropriate. They will go through testing of their academic and practical skills, to include test-cutting. They are then encouraged to exercise themselves in arms, and to engaging in various forms of chivalric debate, themselves becoming teachers.

Eventually the Schola will adopt a ranking system like the one used in the Chicago Swordplay Guild, AEMMA and HACA to communicate experience across the medieval martial arts community.

Our first challenge is to reconstruct sufficient material to teach our first two introductory courses–the longsword and the polearm. For this purposes a booklet has been assembled containing important reference texts, notably de Liberi (1410), Jeu de la Hache, and Master Sigmund Ringneck’s Commentaries on Johann Liectenauer’s Fechtbuch. Other references are expected to be included as more is learned.

Classes
Our first work will be done on Thursdays at Mission College, San Jose (San Franscisco Bay Area), and will encompass the basic longsword course. No equipment will be needed at first except for gloves, knee and elbow padding, groin protection, although a group purchase of wasters will be arranged. For more information contact us–if we can’t help you we’ll steer you to a reputable school or group nearby!